Recently, our family had the opportunity to check out Moe’s Original Bar B Que in South Portland. Orono-native Dewey Hasbrouck first opened the popular franchise in Bangor in 2012, after he and his wife moved back to Maine from Alabama. Two years later, Bangor Metro Magazine named Moe’s the best barbecue in the region. We were intrigued by the promise of authentic, Alabama-style barbecue, which according to Dewey, features a signature, mayonnaise-based barbecue sauce. And unlike other franchises, everything on Moe’s menu is made from scratch every day. 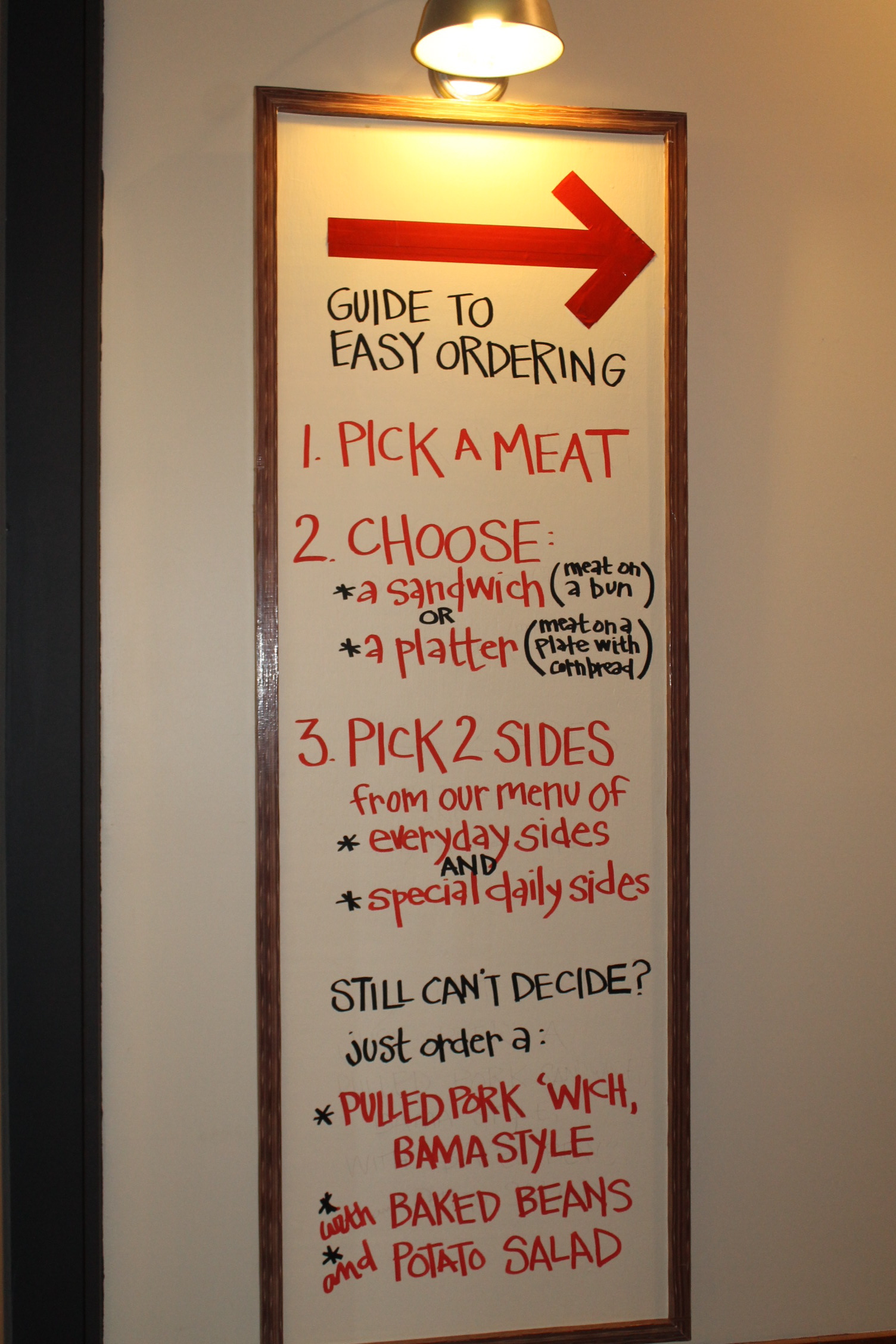 When we arrived at the Western Avenue restaurant, Dewey greeted us at the door. Since it was our first visit, he explained the menu. Adults choose from sandwiches or platters, featuring pulled pork, smoked chicken and turkey, fried catfish and ribs. Moe’s also offers a rotating selection of homemade sides daily. On the evening we arrived, smoked turkey gumbo, stew, skillet corn, macaroni and cheese, baked apples and pumpkin pie were the special sides. Vegetarian, dairy-free and gluten-free menu items are also available.

Moe’s focus is good food at a reasonable price. With that idea in mind, kids under 12 eat free every day (with an adult purchase). MP was pleased to see the kids’ menu mirrored the adults’ version, featuring pulled pork, chicken and ribs. Not surprisingly, there were standard kid options, too, including chicken tenders and grilled cheese. 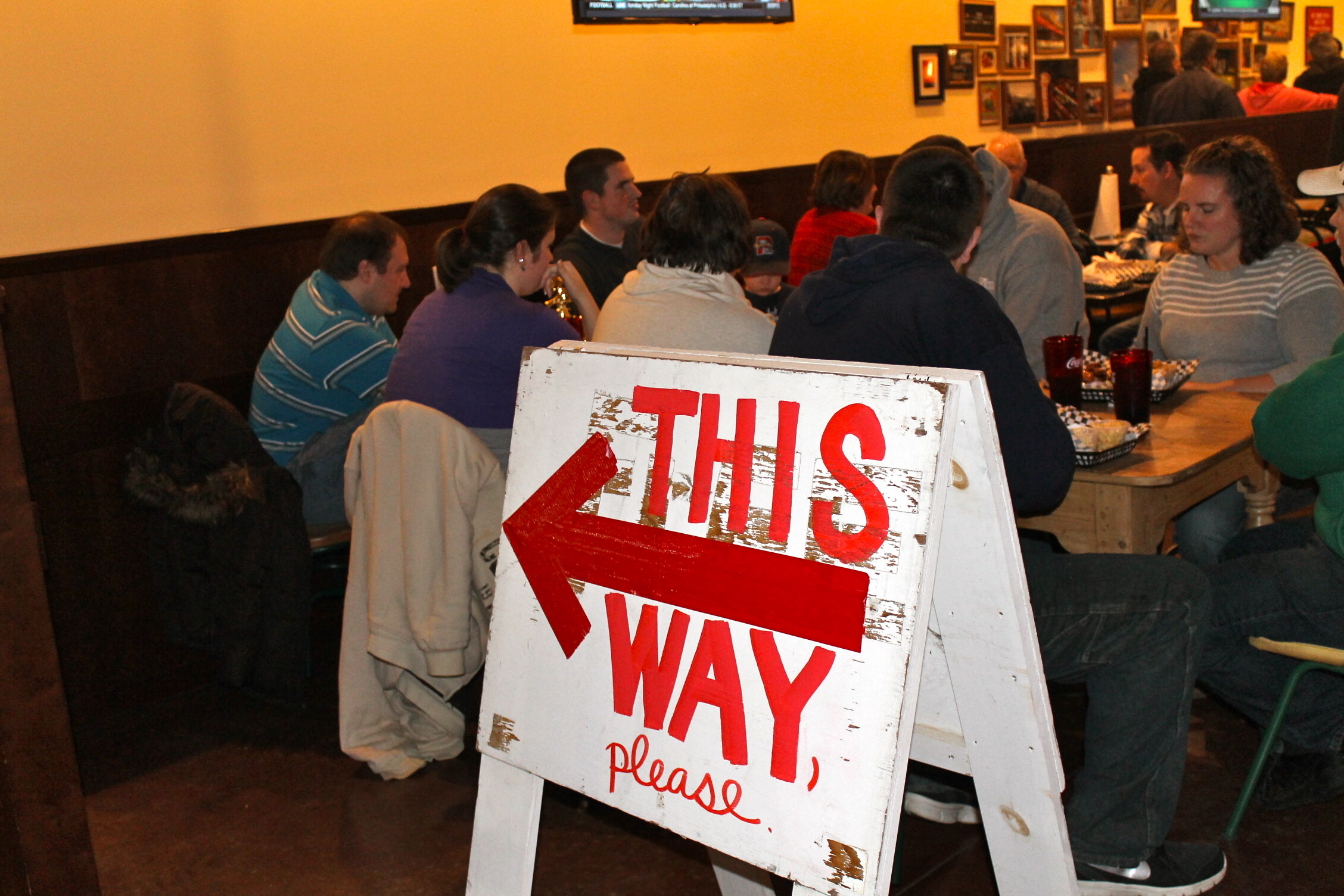 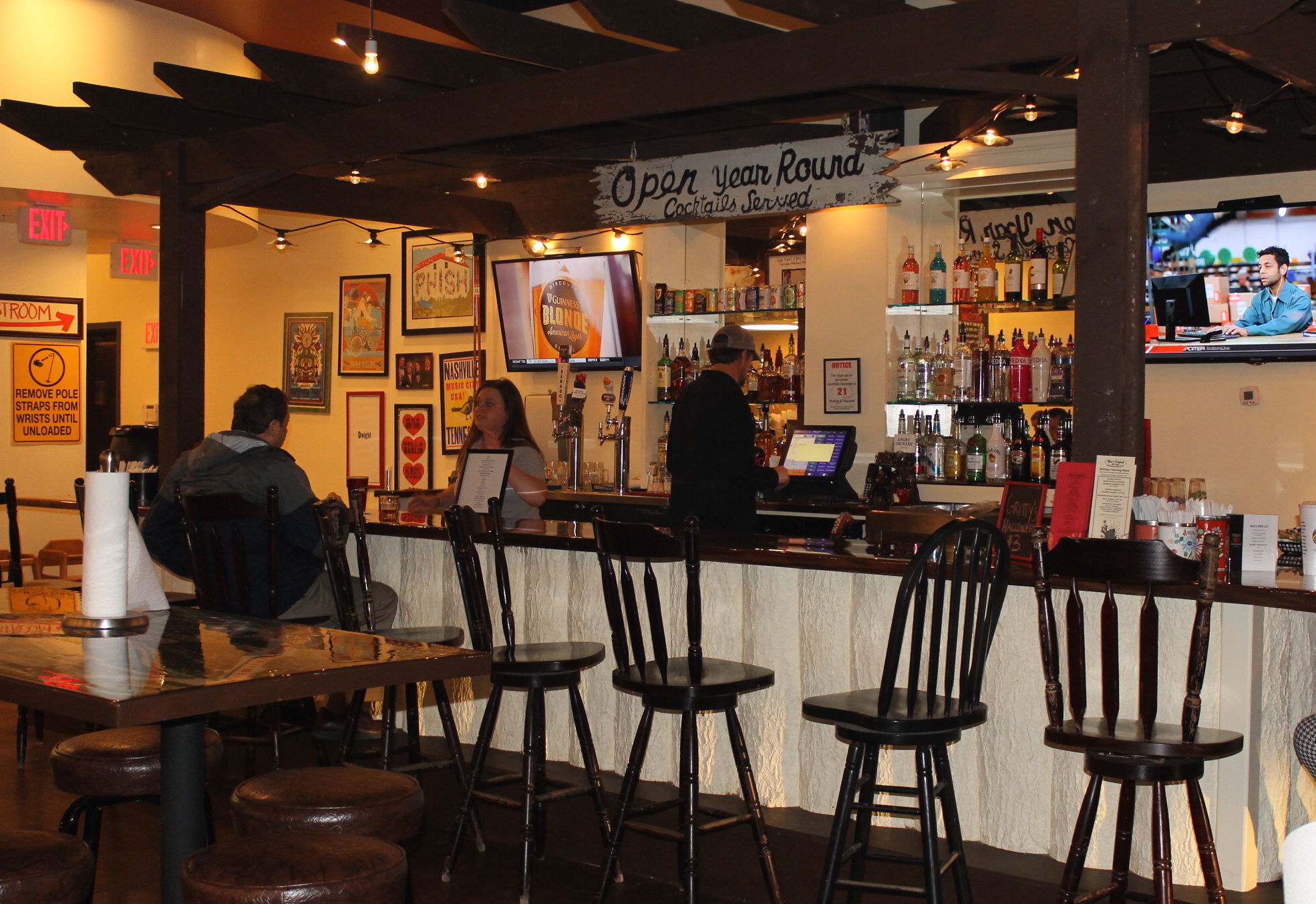 We ordered our food at the counter. MP went with Dewey’s suggestion and opted for the Alabama Slammer: pulled pork, traditional barbecue sauce, white sauce and slaw marinated in cider vinegar on a bun. DP chose the Fried Shrimp Moe Poe Boy, which features homemade tartar, coleslaw and pickles. CP#2, ordered ribs (his favorite) and his sister, who never waivers from her usual no matter where we visit, chose chicken tenders. 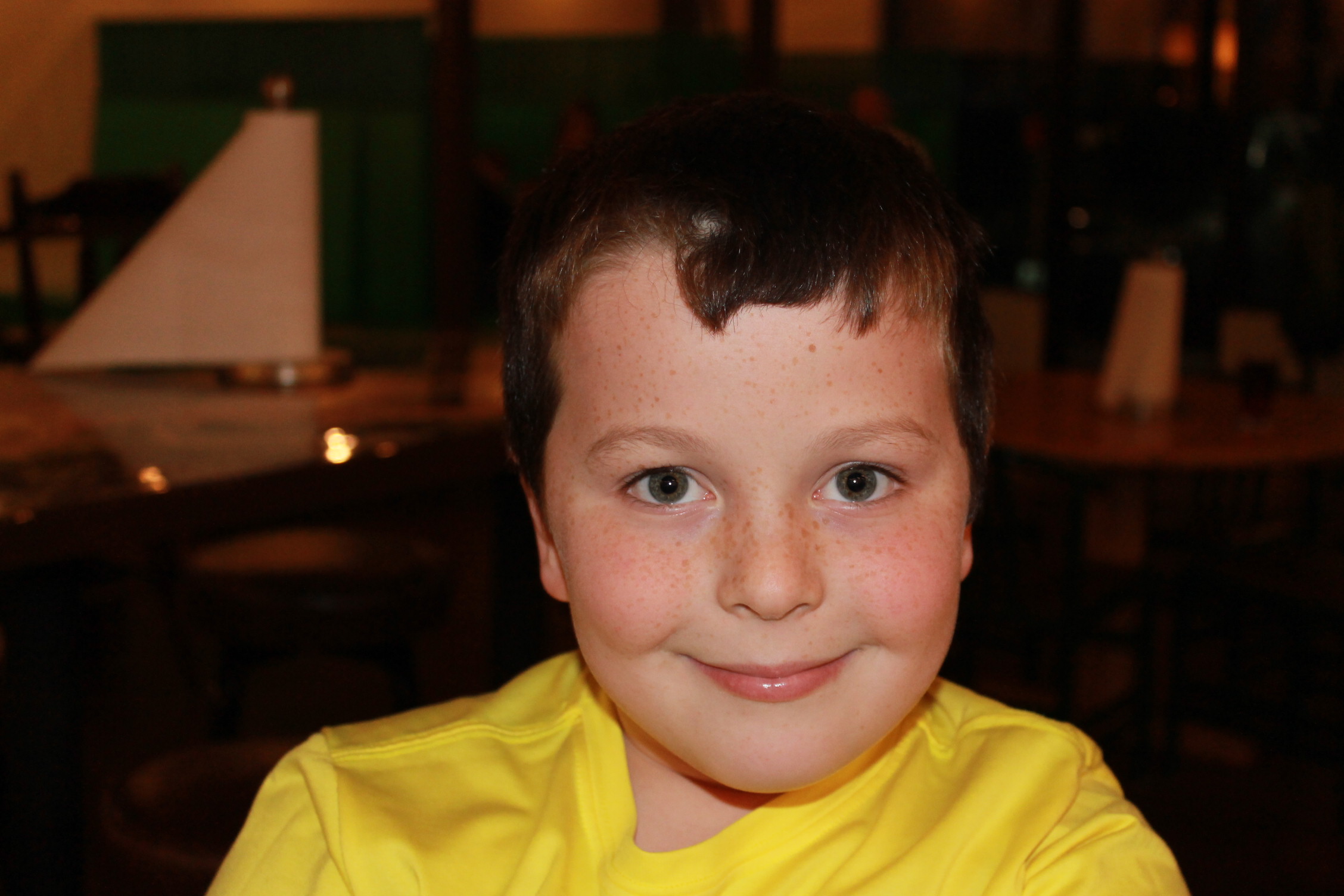 CP#2 is a self-proclaimed BBQ fan.

The comfort food restaurant, which was formerly home to the Baja Grill, is a modestly sized, casual space with a few booths and a mixture of bar tables and traditional seating. Each table has a roll of paper towels, which is always welcome when eating messy barbecue! DP and MP were also pleased to see some local beers on tap, including Sebago and Allagash. 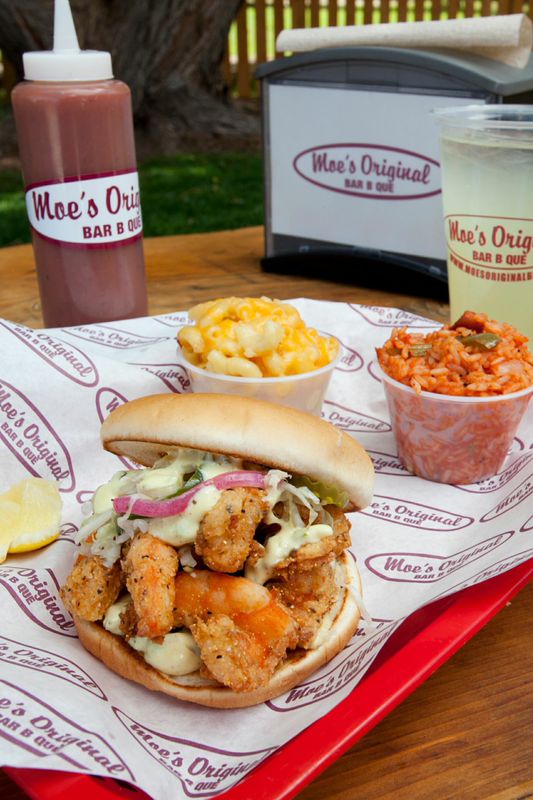 Our food arrived within 30 minutes. The kids, who have hearty appetites, were disappointed by the size of their meals. CP#2 had 2-3 ribs on his plate, and CP#1 also only had a few chicken tenders. So while kids eat free, you may find yourself ordering another plate or two. MP and DP enjoyed their sandwiches, which were flavorful and satisfying. For sides, the specials, which could have used more spices (especially the smoked turkey gumbo), were not standouts. Instead, we all enjoyed Moe’s classic sides, like baked beans and cole slaw, and for dessert, the creamy banana pudding. 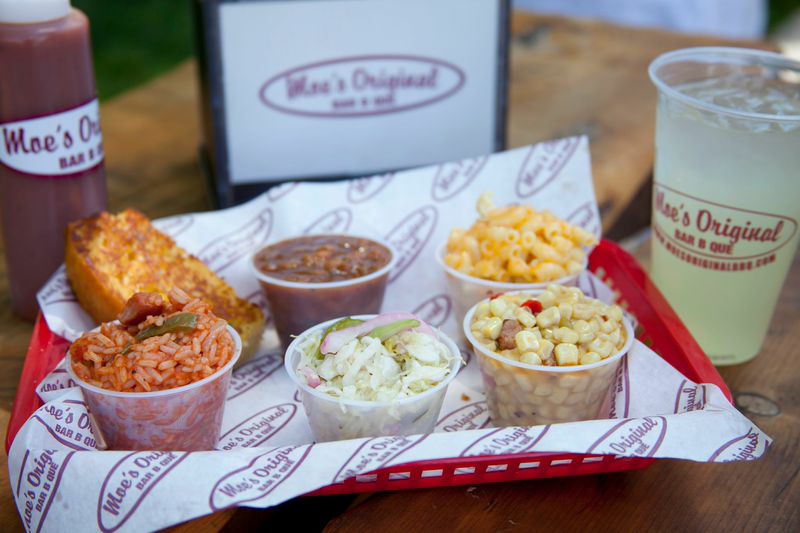 A sampling of sides (photo courtesy of Moe’s)

Dewey is clearly passionate about his business, as he was everywhere during our visit—behind the counter and the bar, serving guests, and chatting with customers. With a few small changes, namely larger portions for the kids and bolder seasoning for the sides, his new venture could gain a loyal family following.