On a bright, January Sunday, we visited Ten Apple Farm in Gray for an hour-long goat hike in the woods. Owners Margaret Hathaway and Karl Schatz and their young daughters—Charlotte, Bea and Sadie—care for a herd of Alpine dairy goats that live in a big red barn attached to the family’s 1901 clapboard farmhouse.

Our family was joined by a couple from New Hampshire who came with another couple and their baby girl. Karl invited us all into the barn to meet the goats—some of which have lived with Margaret and Karl since they purchased the farm in 2005. The family raise the Alpine goats for their own use, mainly for milk, yogurt and cheese. 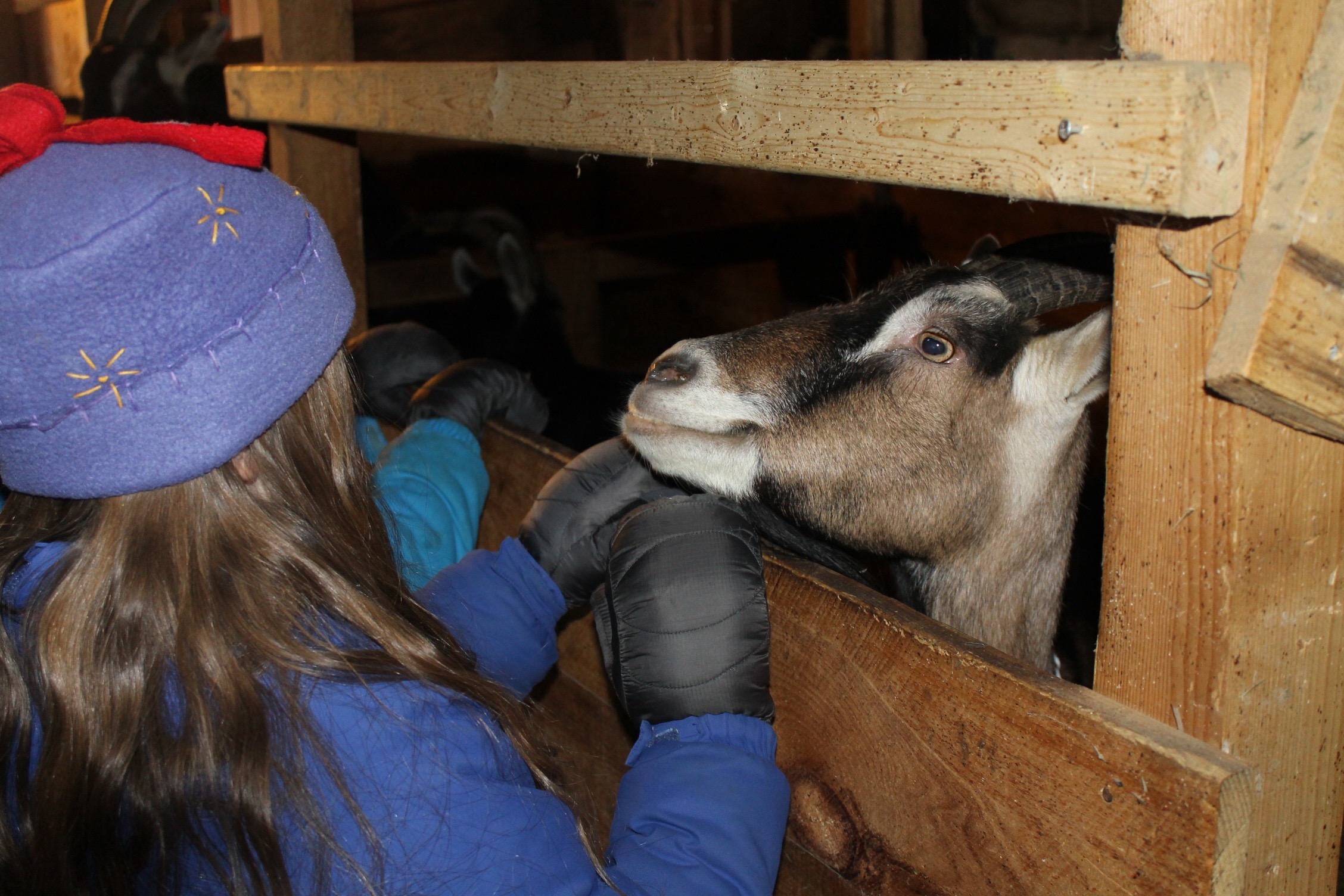 The Alpines have impressive horns, which could be intimidating to some, but Karl explained that the goats are pack animals, and would follow our crew closely through the woods. At times, he said, they might gently nudge us along if they wanted to get by to chew tree bark or munch on white pine needles (a favorite snack). 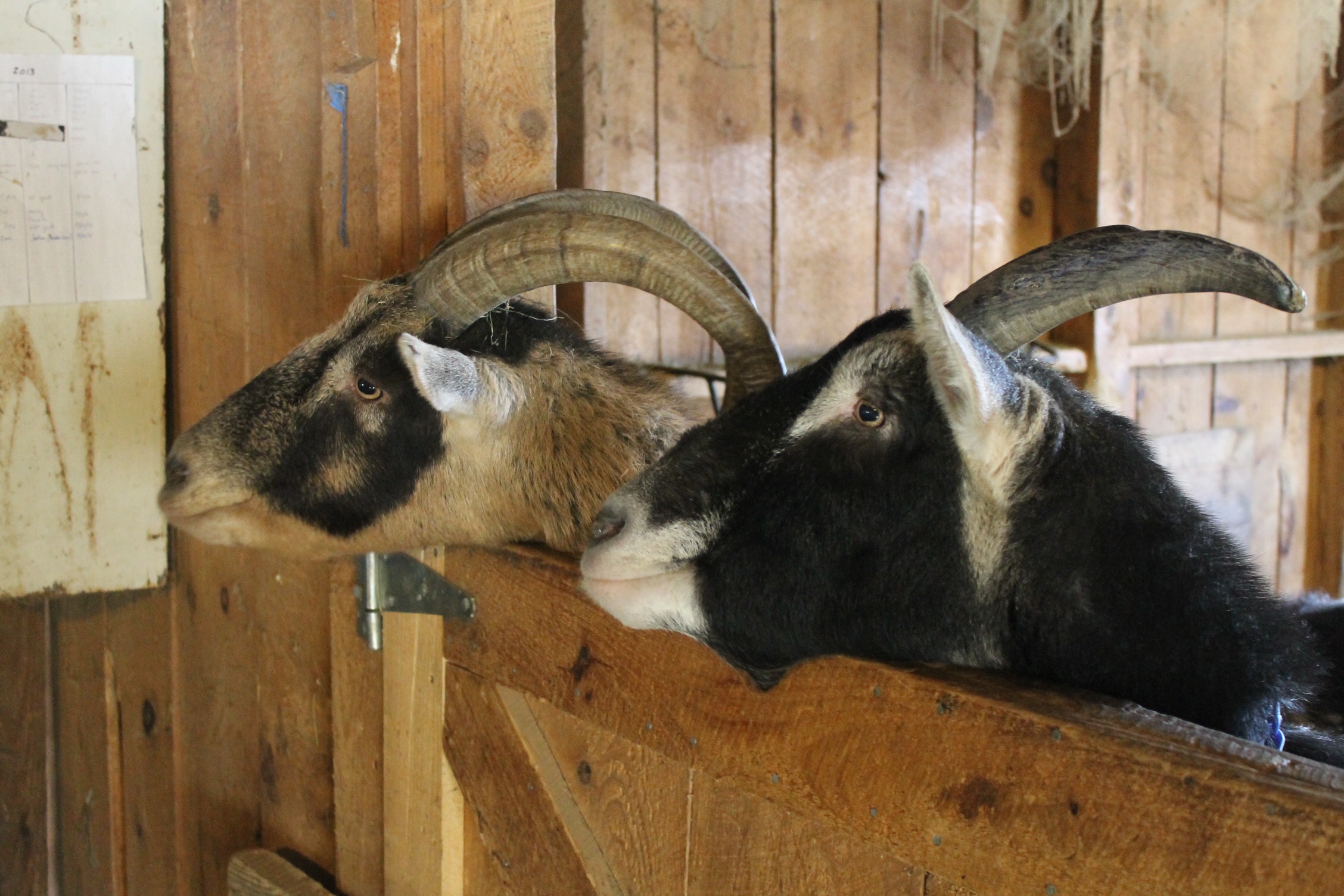 The goats were larger than MP expected. Some stood at nearly five feet tall on their hind legs. Many in the herd stood with their front hooves on the pen, as if to say, “Don’t forget me!” And MP swears a few were smiling when she took pictures.

While Margaret and Karl led the goats from their pens, the rest of us followed Charlotte and Bea outside towards a small orchard of apple trees. We waited there, as the goats bounded down the hill one by one. Just as Karl promised, all of the goats stopped when they reached our crew of hikers. The kids patted the goats’ big bellies and the little one who joined us giggled from her carrier. 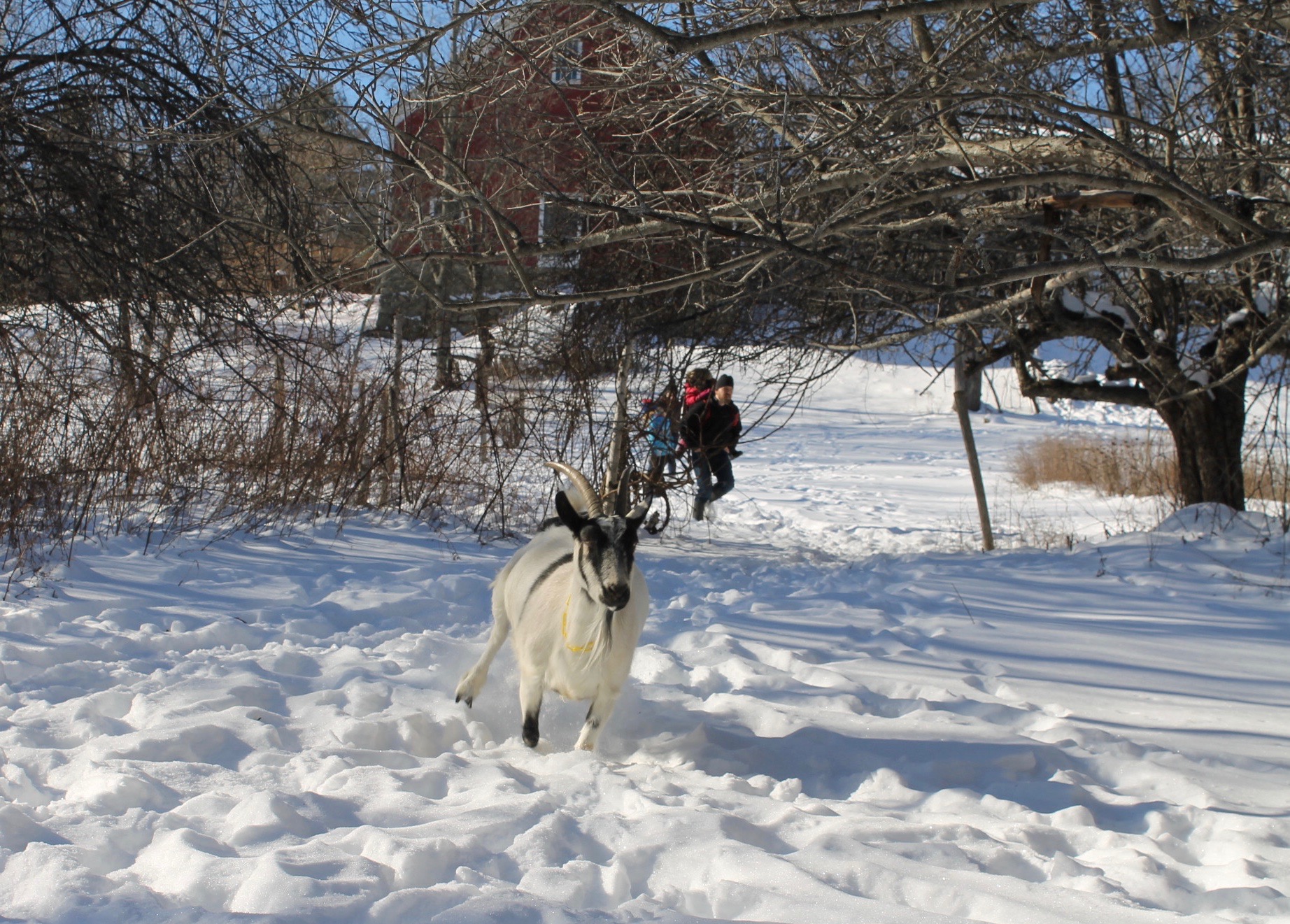 As we walked, MP asked Margaret about the 17-acres of land behind their home. She said the family called the woods Narnia, after the classic fantasy world created by C.S. Lewis. As we walked further into the woods, MP could see why. We reached a small, sparkling creek and then a narrow ridge, where Margaret and the girls once spotted a deer jump across just a few feet in front of them. The family has spotted fox tracks in the snow and an owl, who they call Mr. Brown, flying from tree to tree. 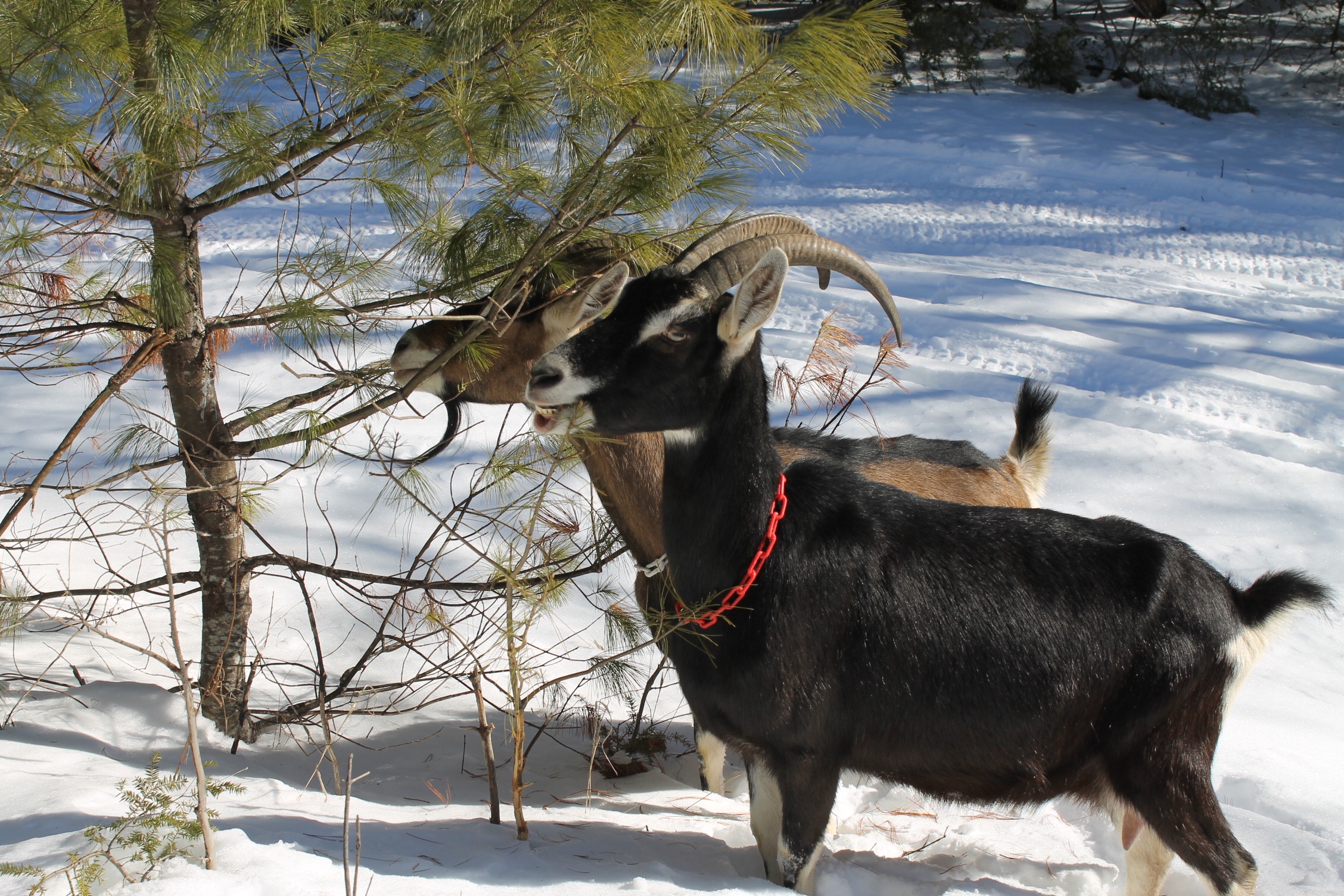 All along the way, the goats happily followed and stopped here and there to chew on a tasty tidbit or playfully lock horns with each other (Margaret says they do this to establish dominance). We walked until we reached the edge of the property, where snowmobile trails made their claim. The youngest of hikers needed to get back to the farm to eat, so all of us looped back, passing stone walls and a cozy Cape which the family calls “The Woods House” and rents through Airbnb. 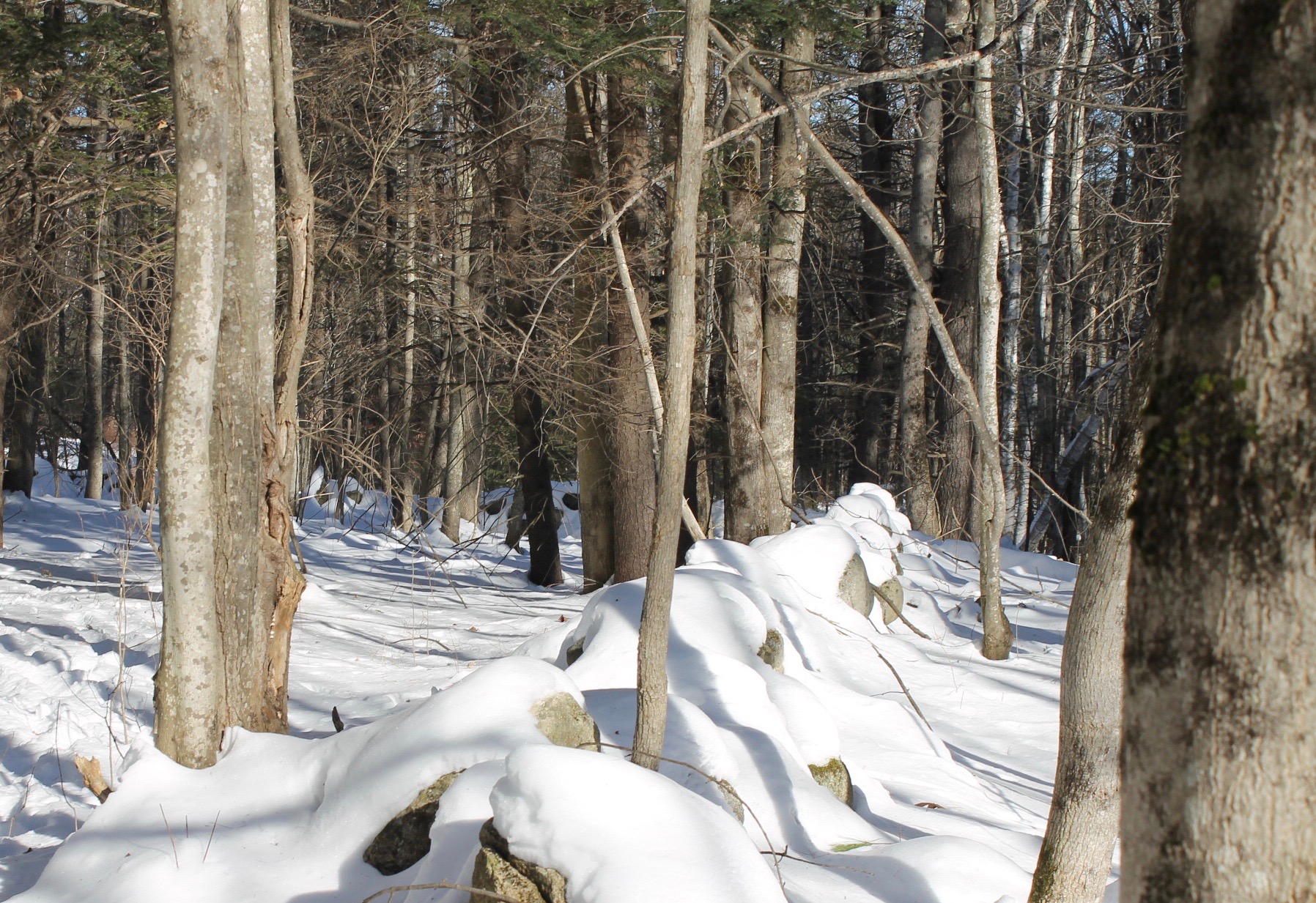 Back at the farm, we gathered in the kitchen for a small celebration. The family treated us to their homemade goat cheese, which was just as creamy and delicious as you might imagine. And since it also happened to be Karl’s birthday, Margaret made classic vanilla cupcakes with chocolate buttercream frosting (made with goat’s milk of course). The kids were delighted with their well-earned treats. We thanked our hosts, who sent us home with some of their wonderful cheese. MP can’t think of a better way to spend a winter morning. 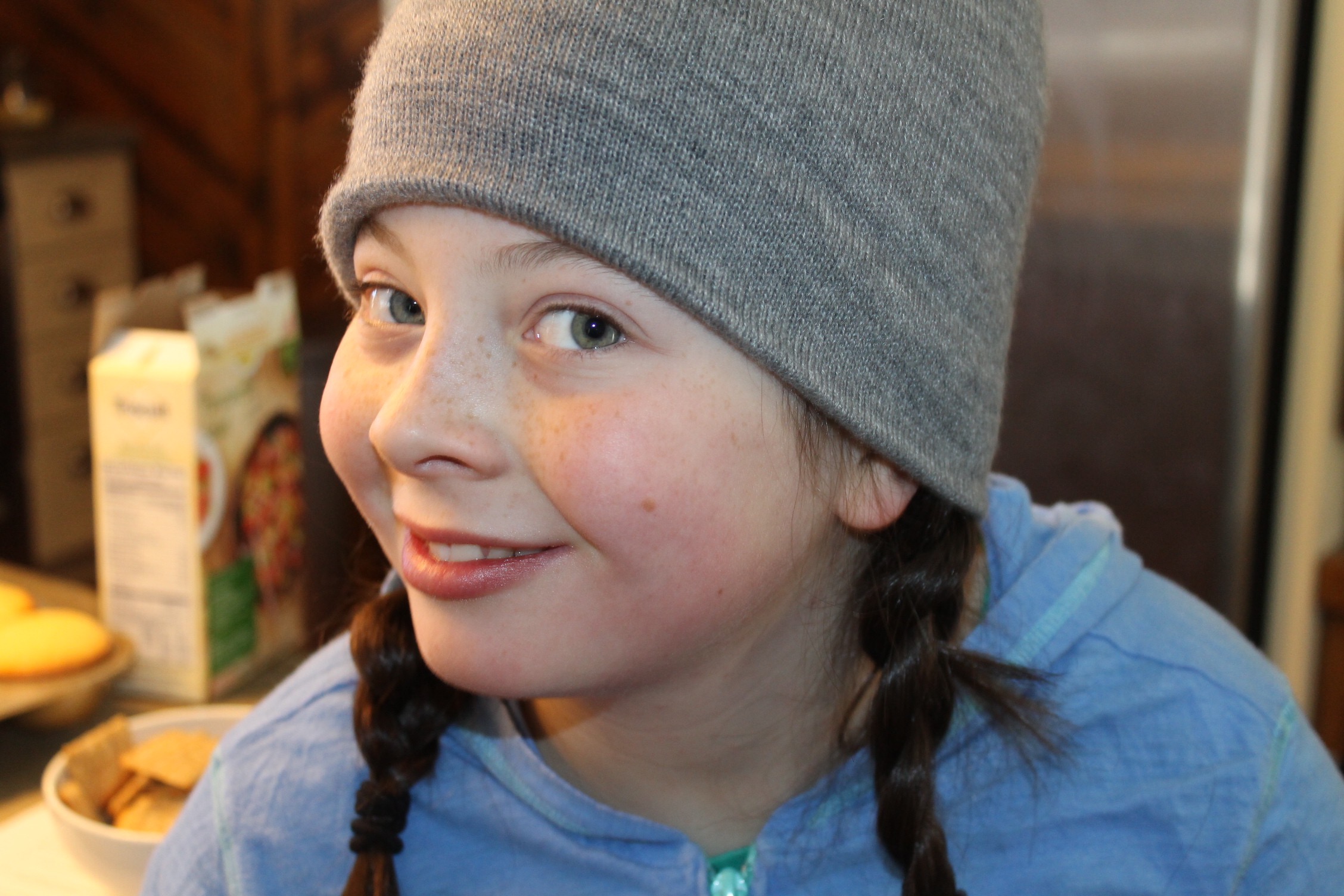