In March, when snow is still a part of the landscape, most New Englanders find themselves craving color and sunshine. To break from the gray and white hues of winter, we decided to take the kids on a road trip to to the Isabella Stewart Gardner Museum in Boston. The museum is home to the impressive private art collection of Isabella Stewart Gardener, a world traveler and dedicated patron of the arts, who lived in Boston during the late 1800’s until her death in 1924. In her will, Gardener gifted the museum to the public and what a spectacular gift it is. 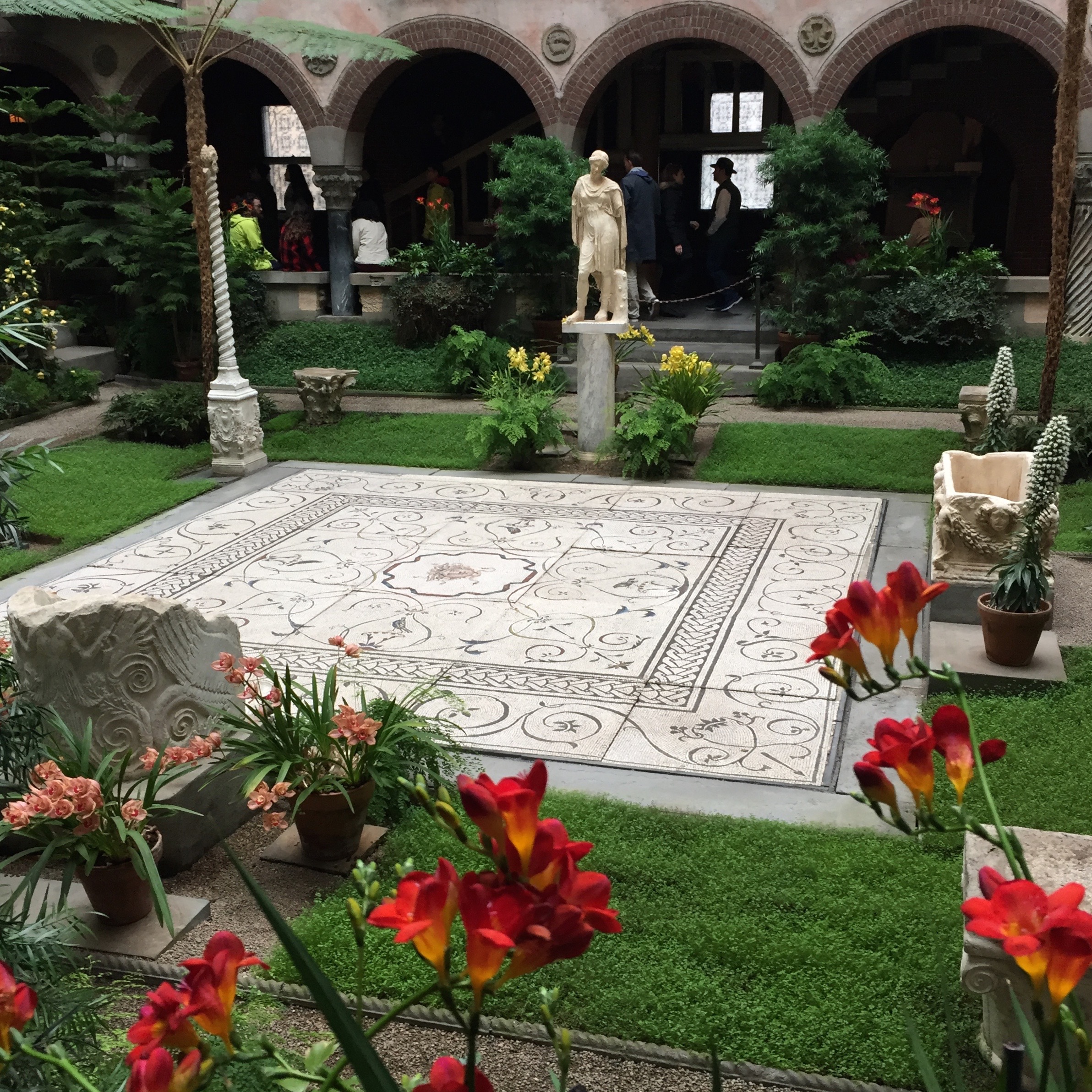 The Gardner is the perfect balance between old and new. The entrance is modern, bright and welcoming. Near to that entrance is a sunny greenhouse that serves as a holding station for the flowers in the museum courtyard. We stopped here first for a much needed dose of spring. MP and CP#1 snapped pictures of the flowers and greenery, while the boys followed along. 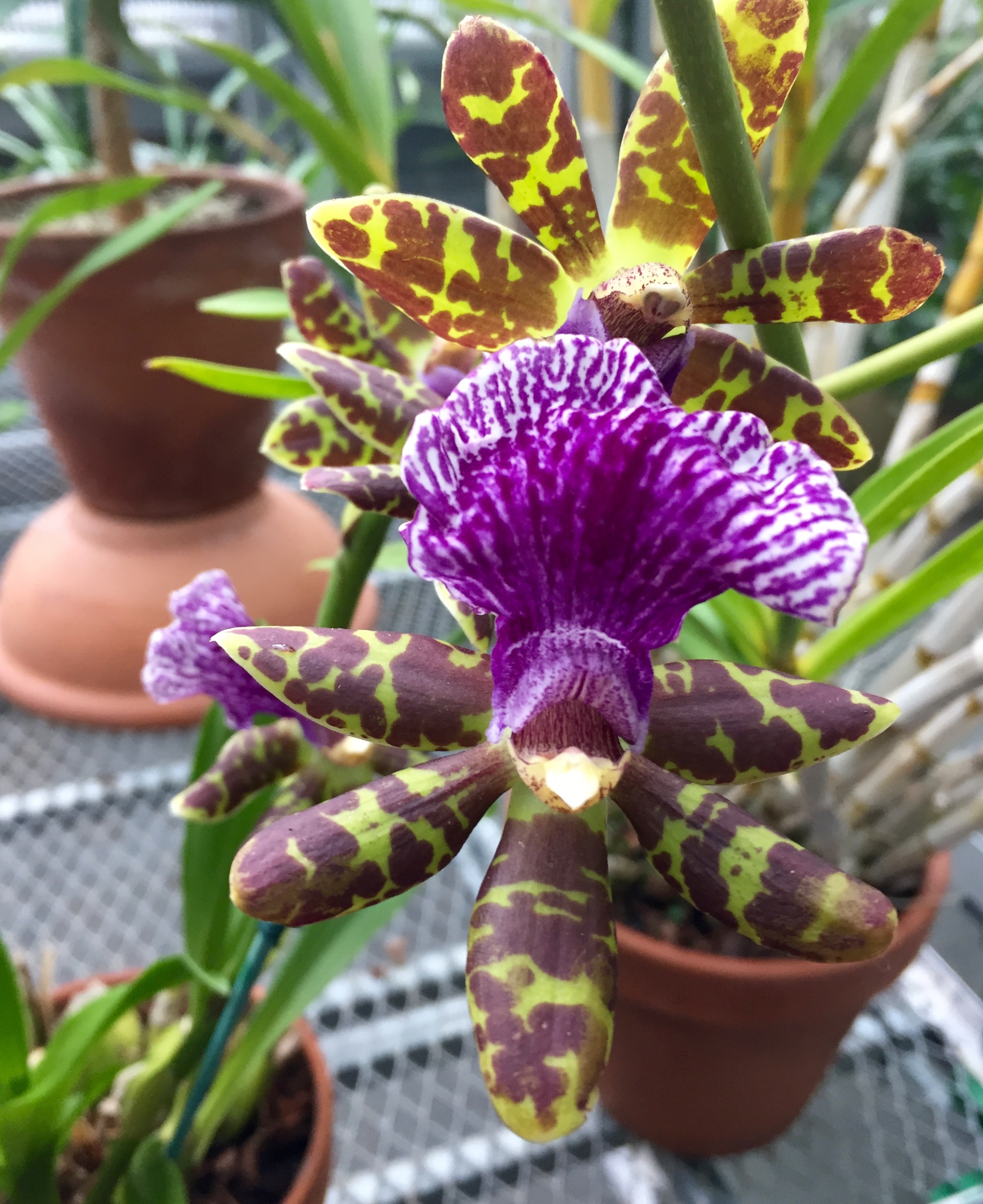 We ventured into the new wing next, which opened in 2012. This section includes a modern living room space where guests are invited to sit and listen to the birdsong of the museum’s fife canary, Mr. Whistler. The kids loved watching and listening to this bright yellow bird.

As much as the song charmed us, MP found herself encouraging the kids to move into the original part of the museum, whose design was inspired by Gardener’s trip to a Venetian Palace called the Palazzo Barbaro in 1884. The first floor is home to a stunning courtyard that transports guests to another place and time. The light pouring in from the skylights, the flowers, and the rich green grass could cheer the grumpiest of winter souls. 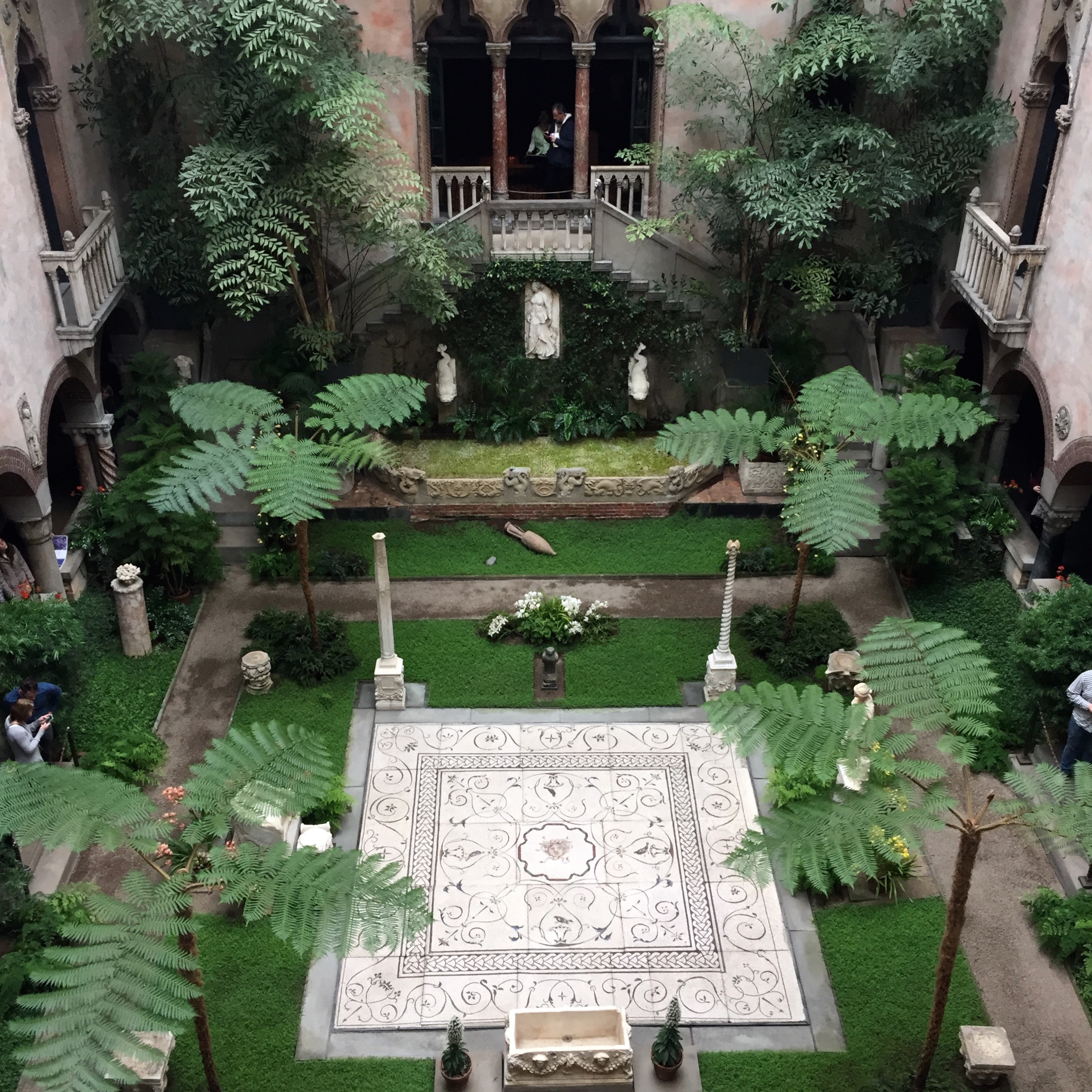 MP was so glad the kids loved this courtyard as much as she did when she first saw it years ago. There’s so much to appreciate — from the stunning tile work and statues to the ornate windows and grand staircases.

Now before you’re surprised by how our children embraced the museum, you’ll want to consider the next two photos. CP#2 had a special fondness for a large scale John Singer Sargent painting called El Jaleo in the Spanish Cloister. 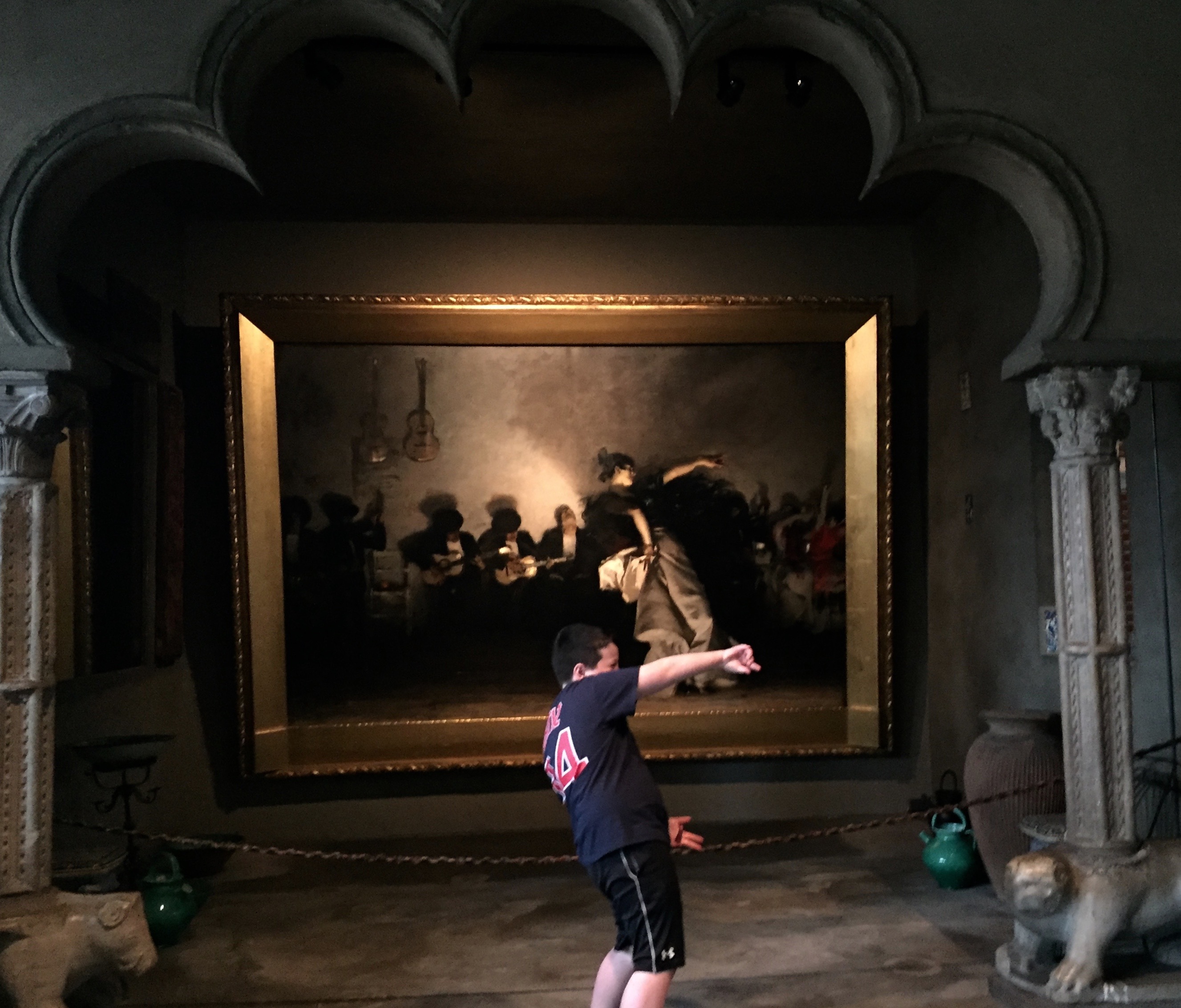 On the second floor, our children were fascinated by two rooms. The Dutch Room, which is known for its portraits, captured their imagination due to a few empty frames. In 1990, thirteen works were stolen from the museum (many from this room) by two men disguised as police officers, including paintings from Rembrandt, Vermeer, Manet and Degas. To date, it is the biggest unsolved art theft in history. The empty frames remain hanging in hopes that one day the paintings will be returned.

The Tapestry Room also enchanted the kids. The design is reminiscent of a grand Medieval castle. This dimly lit room features large Flemish tapestries and a massive stone fireplace from a French chateau. Of course, when you see something of this size, you’ve got to dab, because why not? 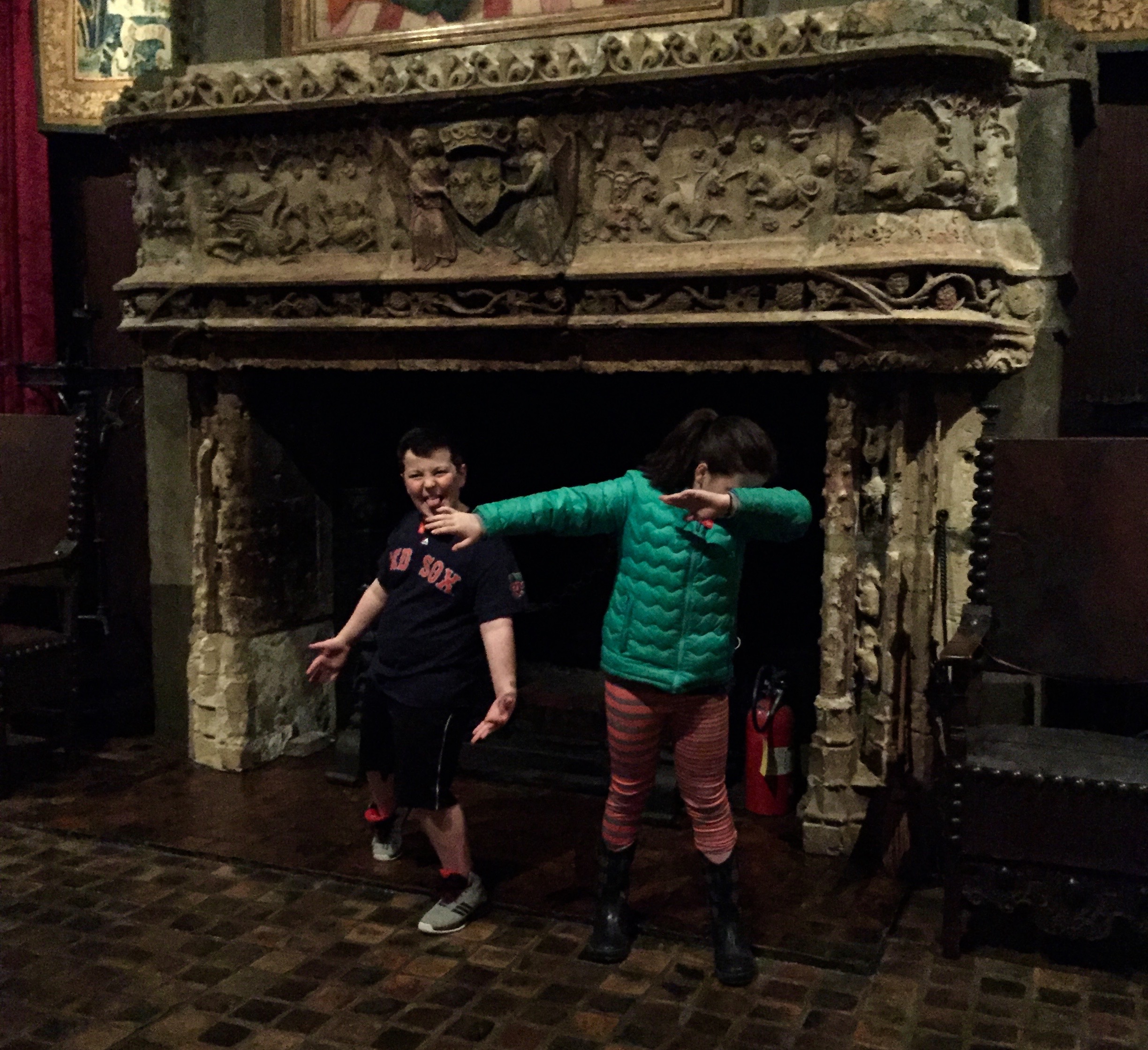 After touring (and dancing) our way around the museum, CP#2 and MP took a break near the courtyard and found some paper and pencils nearby for drawing. Gardner wanted her museum to be a place that inspired guests, so it felt right to sit and sketch while we were there. 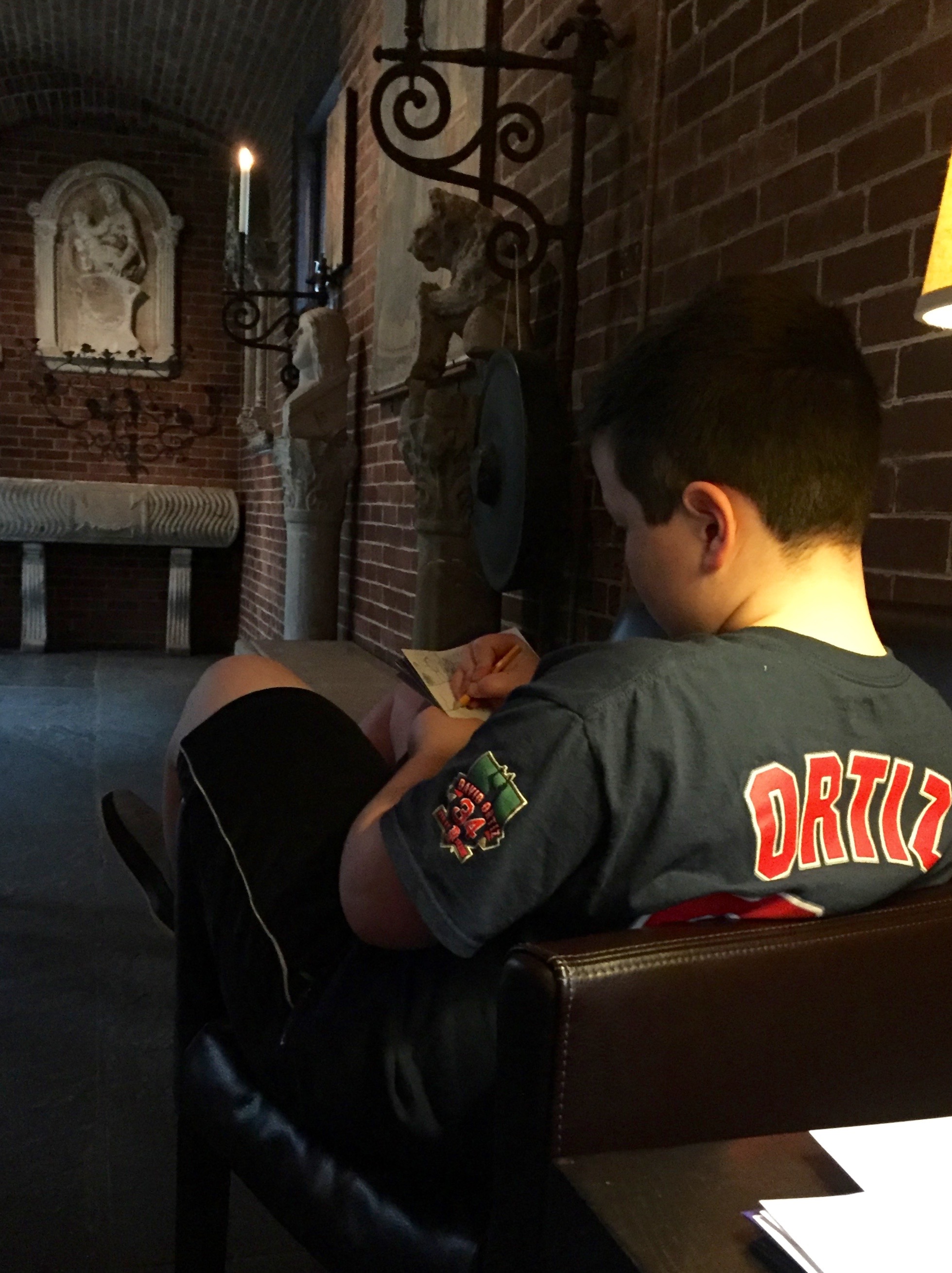 We rejoined DP and CP#1 at the museum’s Cafe G, a modern, glass-enclosed cafe that offers everything from a full lunch to coffee, tea and treats. While we waited for our food, we talked about all of the paintings, sculptures, tapestries, furniture and rare books we spotted during our visit.

We also learned that the Gardner Museum is home to a Saturday Open Studio and a Sunday concert series, where kids 7-up and adults are welcome. Tickets are available online before you go.